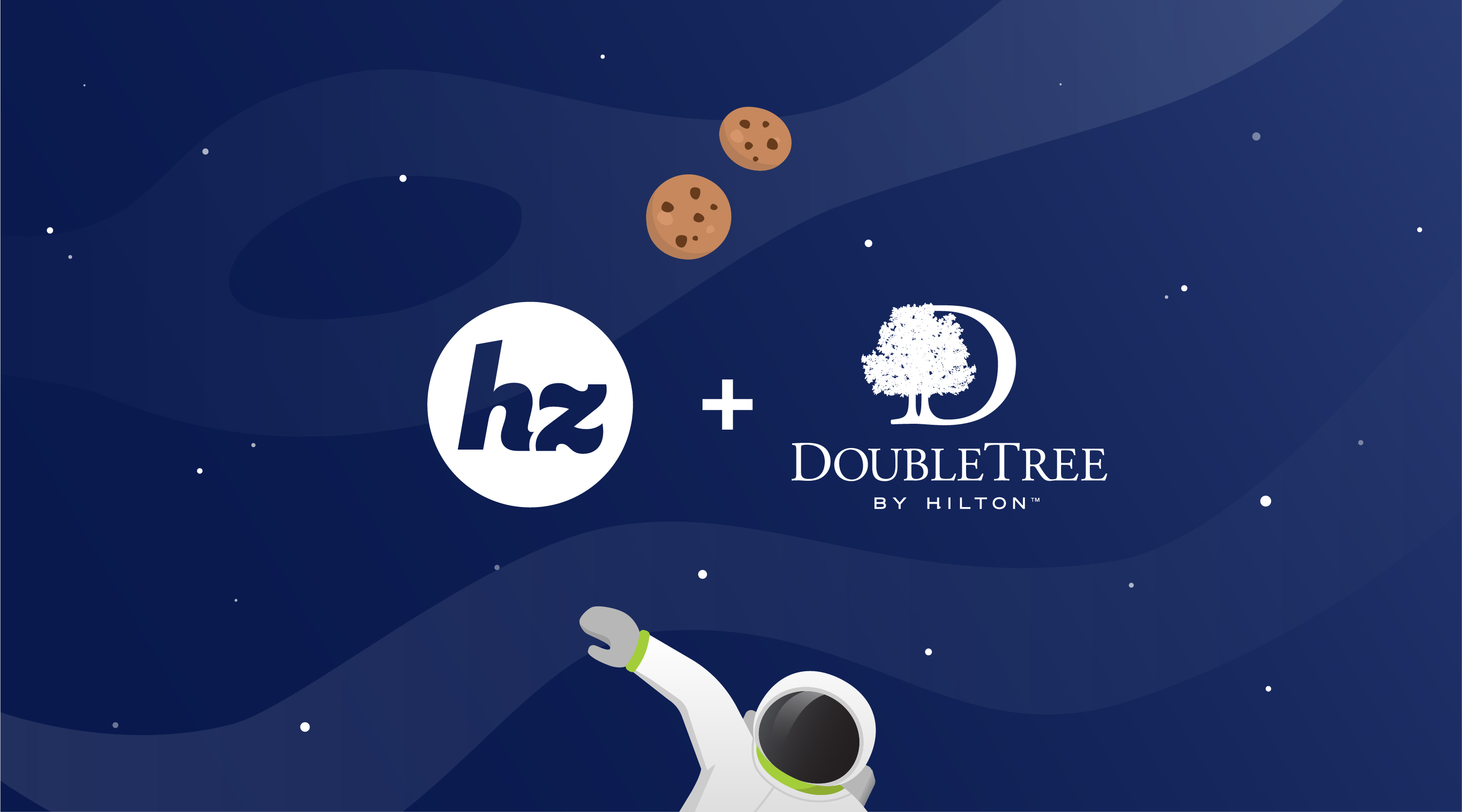 In 2018 and 2019, HZ had the tremendous opportunity to partner with DoubleTree by Hilton to develop a campaign that demonstrated the brand’s willingness to stop at nothing to show their commitment to bringing hospitality to new heights — literally. Emily Schumacher, Group Account Director; and Rachel Steward, Senior Director, Content Marketing, led teams that supported DoubleTree in leveraging the warm welcome at the core of the brand into a consumer campaign that literally reached for the stars.

Emily Schumacher: I remember the call when we first heard that DoubleTree would be launching their cookie dough in space. I think it took us all a few minutes to realize that it was a real update from the clients — it wasn’t April, so we knew it couldn’t be a prank…

Rachel Steward: I think we all felt that way! We were expecting a typical status call, and then the client team started explaining how a friend of a team member knew someone at Zero G Kitchen, and that talks had begun, and it seemed like there was real interest. We were excited, of course, but had no idea how it would pan out.

ES: Then we got the campaign brief. I think that was our real turning point. The team was so excited to dig into a campaign that would extend beyond traditional evergreen content. The idea of doing a broader planned buzz marketing campaign, let alone on a topic as exciting and culturally relevant as space exploration, felt like a huge opportunity for DoubleTree, and for the HZ team. DoubleTree is a brand that has the personality to push the envelope. We knew we had to seize the opportunity.

RS: Right. So we pulled together two very different concepts for campaign content, one that was a more serious and emotional take that played on childhood curiosity about space travel, and then the idea we ended up moving forward with, where an astronaut would come to Earth and bring hospitality to space by returning with warm DoubleTree cookies. The tone and humor was so on brand, the story practically wrote itself.

ES: And then within 6 weeks, we were out in Palm Springs shooting. We were able to pull off a shoot with a really nimble team, and planned for several different outputs— a long form, a few shorter forms for social, and some gif content that could be leveraged for community management purposes, to really bring the energy of the campaign and humor of the brand through from end to end.

‍RS: Coming out of the shoot, we started to learn more about the realities of space travel, and that there would be some moving parts that we couldn’t control — which is basically the worst nightmare for type-A planners and Account folks! We also had to grapple with the question of How much do we really tease? Do people care about teasers, or is it better to save production and media dollars for the “main event” when you can show all your cards?

ES: We mapped out a number of scenarios with the clients and our media and PR agency counterparts, and agreed on a strategy that would rely as little as possible on the actual shuttle launch date, which was the one thing we really had no control over. Once we had the rollout plan nailed down, we had to go back into the content we had captured at our shoot, and re-map the story narrative so it would work across all the different touchpoints. Our production team brought a lot of great thinking to the table to reimagine the footage we had already captured, which was a great exercise for us and a reminder that captured footage can take many different forms with the right team working on it, and some creative thinking. Re-shoots are a luxury, and honestly, not always necessary.

‍RS: Once we had the core pieces locked in, we turned back to the “reveal” stage. We came up with an idea that would bring the astronaut together with some key cross-interest and cross-geographical influencers on the streets of New York City, hoping that it would attract attention on the streets and also capture a really wide audience net via content they developed and published for their own audiences, knowing that we had to appeal to the broad DoubleTree audience as well as to the more niche space enthusiast. This was timed with the official announcement to the press, and set us up to be able to tell the story of the cookie traveling to space in our own way once the initial splash was made.

‍ES: Aside from the core pieces coming from influencers and the brand, we had the opportunity to take advantage of property-level marketing, as well as the portfolio of Hilton brands, to help support the activation. We developed a toolkit of assets that local DoubleTree properties could leverage on their channels at each of the core campaign moments, to help unify and bring some brand recognition to any content they shared out. For other Hilton brands, knowing that we had fantastic marketing colleagues, we developed a campaign brief and worked with each brand to develop a support approach in a way that made sense within their broader strategy. So there was some connective tissue, but still lots of room for creativity and support that would feel very brand-authentic to each of their followers. All of the elements combined, coming from various channels with a variety of audience bases, allowed us to hedge our viral marketing bets.

RS: The last piece of the puzzle was planning for the unknown. Because we were talking about a culturally relevant topic, there were some connected moments, like the first picture of a black hole, that came up along the way. We treated these as a moment to head nod to our upcoming announcement, without explicitly calling it out in a way that the public would understand. But capitalizing on those opportunities allowed us to extend the campaign even further, and achieve our core brand goal of being very relevant. So even though they didn’t carry the message of bringing hospitality to space, they were part of the overarching success of the consistent campaign topic thread.

ES: Final recap reports are still in the works, with some campaign elements still left to come (stay tuned!), but engagement and reach metrics supporting the first phases of the campaign have been extremely promising. We are thankful to the Hilton and DoubleTree teams for the opportunity to develop a truly out-of-this-world campaign demonstrating that DoubleTree hospitality knows no limits.

Check out our work here!

Looking to develop your brand or campaign, or just feel like chatting and learning more? Please reach out by emailing us at newbiz@hzdg.com. We would love to talk to you about how we can work together!

Shop As You Scroll: 3 Ways In-Platform Shopping Is Changing Retail

The Future of Email Marketing and the End of Open Rates